Au revoir but not goodbye…

After an eventful 24 years, one of Ufford Park’s most stalwart supporters, Alan Long, stepped down as a Director at our latest board meeting.

As a former Chairman of Best Western Great Britain and Best Western Europe, MD of Barnham Broom and Chief Executive of Abacus Hotel Group, Alan brought with him an absolute treasure trove of experience in running hotels.

We unashamedly tapped into this resource time after time as he helped us through both the good time and two recessions; the first of which hit shortly after we opened in 1992. Alan knew the job in hand and was always very free with his time, advice and backing.

His philosophy was one of growth …”all hotels need to maximise bedrooms…”. So with his support, we grew the hotel from 25 bedrooms, converted the Lodge, built 17 rooms over the Spa and most recently, 50 more around the American Golf Store and driving range bringing our grand total to 90 bedrooms.

Aside from being a font of knowledge, he has also been a great friend to Ufford Park’s owners, Colin and Shirley Aldous from the very start.

“We will always be eternally grateful for Alan’s knowledge and encouragement especially during the last few years which have been very tough.”

“The economy now seems to be making a recovery so he leaves us in good shape and with a bright future.

“He gave us friendship and encouragement over many years and we are very thankful.” 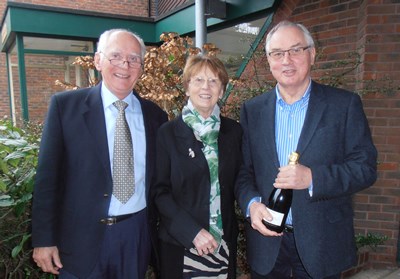 Colin and Shirley Aldous present Alan Long with a Bottle of Adnams Champagne and a set of Diamante Champagne glasses to express their gratitude as he retires from the Board.