The Ufford Park Seniors team returned to the club with the envious and well-deserved title of National Champions! 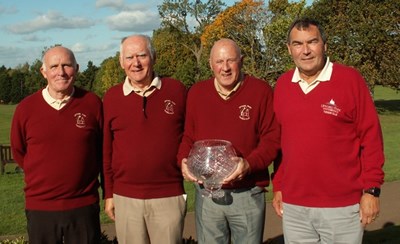 They brought back with them the National Seniors Club Classic Trophy all the way from Staverton Park, Northamptonshire after a well fought victory over Bishopswood who hail from Hampshire.

Having overhauled Nottingham’s Bondhay Golf Club 3-1 in their semi-final, they lined up against the team from Bishopswood fresh from their 3-1 win over Oakland Park.

Bishopswood looked like holding off Ufford Park for much of the final match but they managed to dig deep in the last couple of holes to halve the match. Much like penalties in a lot of major sports tournaments now, there has to be a winner so the two lowest handicappers headed back out for a play-off.

A nail-biting 1st hole saw no space between the two as they halved but Alan McMillan held his nerve very well and won the 2nd hole securing overall victory for the team.