Tuesday Club vs The Rest of the World

The Senior section at Ufford Park Golf Club, known as "The Tuesday Club", have enjoyed a competition for many years to synchronise with the bi-annual international professional golf competition "The Ryder Cup", which is held between the USA and Europe.

The match between members is classified as Suffolk vs The Rest of the World. To qualify for Suffolk, you have to be have been a resident of Suffolk for a minimum of 30 years.

This year, a group of 40+ competed on 3 Fridays, a foursomes, 4BBB, and culminating in a single event of 22 pairs.

On Friday 22nd October, The Rest of the World retained the Trophy with an overall points win of 25 to 17. 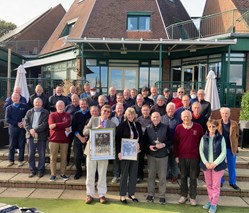 Mr Colin Aldous, founder of Ufford Park Golf Club, became aware that Mary Moore of Brandeston was Samuel Ryder's granddaughter, following a report in the EADT written by the then editor, Terry Hunt.

"Mary very kindly accepted the invitation to present our Trophy in 2018 and was scheduled to repeat that honour to us in 2020. However, COVID-19 resulted in a 12-month delay to the competition, as well as the very sad passing of Mary Moore in January 2021. Subsequently, I approached Jennifer Garnett, who is Mary's niece and whom introduced me to her aunt initially, and she kindly agreed to continue this role in her official family relationship of "Samuel Ryders Great Niece", in honour of her wonderful Aunt Mary".

The photo shows all the participating Tuesday Club members fronted by David Garnett holding the original photo of Samuel Ryder and golfing colleagues; Jennifer Garnett - Samuel Ryder's Great Niece; Alan MacMillan "Honorary Captain of The Rest of the World" holding the Trophy; and Colin and Shirley Aldous, both born and always lived in Suffolk, as well as being the founder of Ufford Park Golf Club.